In 2014 we received a few requests from Hainan to collaborate with a local design firm and do design several projects. As a lot of our work is reacting to climatic conditions of the tropical environment, we were excited to have the possibility to potentially build some of these projects.

Being excited about the return with projects to the beautiful island, we were also hesitant about our project history in Hainan, which continuously ended in some sort of disaster due to the political complications at those times, we were involved in projects:

We (that time with OMA Asia and Aaron Tan) started engaging with Haikou in 2002 with a large master plan commission for the eastern extension of the city. Big plans drove the local government to double the footprint of the city in the east, planning tourism, convention and leisure and recreation centres along the coast. At that time, Sanya was already a strong brand for tourism with its white beaches and stable tropical climate. Haikou to the contrary is under the influence of the winter monsoon (and therefor colder in winter). Lying opposite to the mainland, beaches are rather diluted with debris from the rivers that flow into the South China Sea.

With that in mind, we developed a master plan that was the complete opposite from the nature driven Sanya. We didn't have the serene environment to lavish on the tropical paradise. Hence we created attractions in itself in form of themed villages, offering a village for marina-, 'venice'-, mountain-, beach- houses. All were centred around a larger convention plaza with a Brighton style pier park: 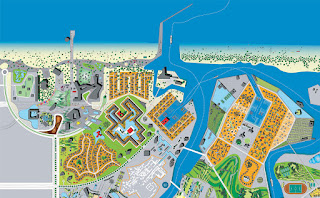 The client even increased our workload and extended the area as he thought that this was the right track. However, shortly after completion of the concept, the extension to the east was scraped by the government, the local leader dismissed and the new chief focussed on the west instead. Couldn't see that coming...

Our next engagement with Hainan was in 2011. A Hong Kong contractor/developer, whose ancestors came from Wenchang wanted to re-invest into China. And as most of the Chinese who went abroad to make a fortune, they tend to invest into their ancestral home (I guess they assume that still intact family ties help to overcome statutory difficulties in their hometown). So we went to Wenchang for a couple of days to look at potential sites and started a commission for a small office and entertainment building in Wenchang: 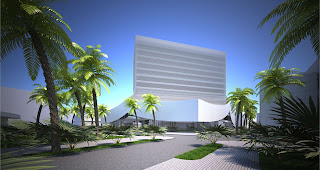 As history repeats at times, the contractor/developer ran into financial difficulties due to his commission on Tamar site works and rather took off to save his soul than pursuing his engagement as a developer in new territory.

And of course our entire last year of dealing with Hainan is a more or less repeating story. We got interesting designs of which some went further than others, but difficulties were of similar nature: Political change, imprisonment of decision makers, financial difficulties, you name it. In a way they were the signs of a troubling economy and lucky for us, we were confronted by it already in 2014 and started to withdraw from China business quite early already. What we have learned from there is the need for the strongest of partners in China (which we didn't had) as well as our self-indulgent nature of really wanting to do projects. Architects like us have this unbearable absence of business sense. Somebody gives us an opportunity to design and we eagerly work on it without too many questions. We obviously justify our proposals as design research, using the explorations as a formal exercise and ensign practice. This attitude is rooted in the structural problem of our profession, being a discipline that thrives on pro-bono work even during a contract. The nature of competitions (free idea generation), fee proposals with conceptual idea (free proposal upfront) and a vague contract and deliverables culture have paved the road to a self abusive nature of the architect. We are in constant jeopardy of clients taking our ideas and/or choosing somebody who is so much cheaper (service is intangible).

From proposals and paid designs we have nothing left. Except for portfolios and content for the website. Therefor: Our first Hainan project of 2014 was a small business hotel. Being heavily damaged by several Taifuns and tortured by massive construction mistakes, the hotel was in deere need to redo the facade and obviously all interiors as well. Being one of the first hotels on the route from the airport to the city, we wanted to use the renovation to create a business hotel that allowed for an interpretation of a curtain wall for tropical climate, introducing triangulation and cantilevers to increase self shading elements: 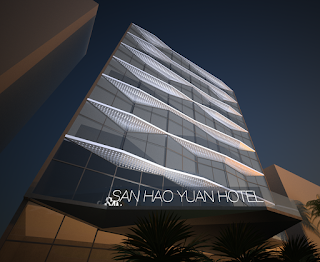 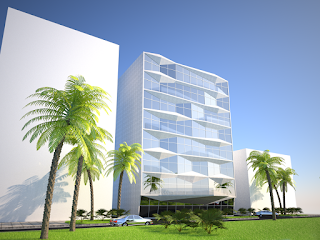 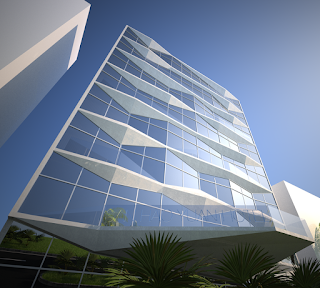