Preservation is a delicate issue in a city like Hong Kong, which is reinventing itself in a rather frequent cycle, creating radical paradigm shifts every 20-30 years. In that process of restructuring the city, the West Wing and Government Hill came under threat of demolition: A colonial, governmental cluster, built over the period of British rule over Hong Kong. With the Hong Kong Advisory Board closing this latest outrage of the public on this process of destruction and reinvention by granting the Grade I status of a monument, an uneasy silence fell over the debate on what to do with that premise in the future. 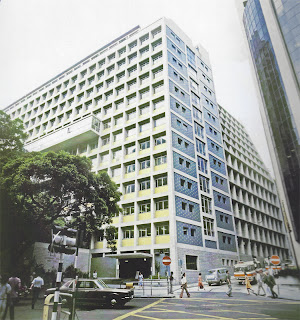 I always liked that building as it one of the few buildings in the city that embraces the fact that it sits on a steep slope (most of them tend to ignore the topography and just create a new flat ground). The West Wing is offering multiple levels of entries and acts as a sectional device at the foot of the mountain that becomes the Peak. On the points of interface between mountain and building, there were a few public anchor points, that are specifically highlighted architectural and volumetric: A retaining wall that extends into the ground lobby and a cantilevered box in the middle of the building, that acted as a canteen and event space. It is not necessarily a mind blowing building, but a modest proposal for a modern post war architecture.

Most importantly however is the fact, that the building hits Queen's Road Central at its front end, the most central of all Hong Kong roads, forming the spine of the CBD of the city. Its back end leads into an extensive green zone that contains the zoo, Hong Kong Park and eventually leads towards the Peak and its nature reserves around. The urbanism is fascinating around the building. City on one, nature on the other side. The West Wing is the wedge between the two. Unfortunately it is a hostile one as it is programmatically detached from both.

As usual in the debate about preservation in Hong Kong, it is not the architectural value that makes the building worth it, but the social condition it created and are now considered part of the collective memory. In case of the West Wing it was the public consultation counter (the first of its kind in a governmental building) and the cantilevered box that was hosting parties for young people once in a while. It made the building a very public space in the eyes of the people. It nearly introduced participative opportunities for the community. I guess this memory is growing stronger every day especially as the current government lacks the will to offer participation for the public. Neither is it willing to create opportunities for young people or emerging entrepreneurship. 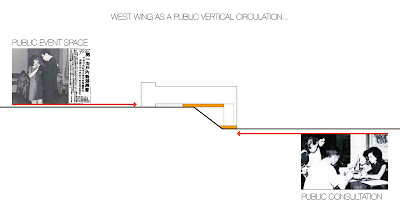 When we were approached to do a proposal for the West Wing, we were wondering how we can enhance social conditions spatially. And how can we then make those spatial potentials social again. We wanted to transform the building, yet preserve its functional status as a public incubator inside a governmental compound.

Our proposal was a most simple one: We introduced an escalator that connects the lower urban fabric with the mid-level of the building that contains the cantilevered box as well as an upper plaza. Connecting the public spaces inside and outside the building by an external circulatory system manifests the social and public value of the building and allows to open the building for more civic functions (in fact as it used to be). 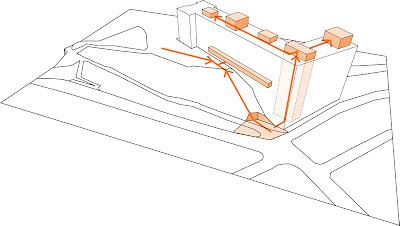 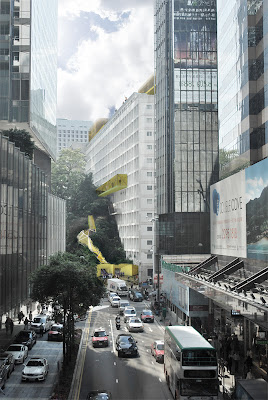 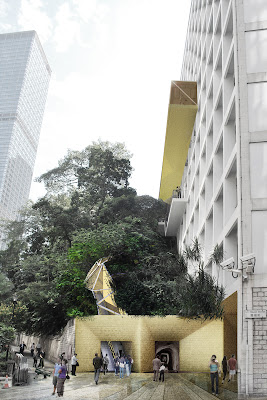 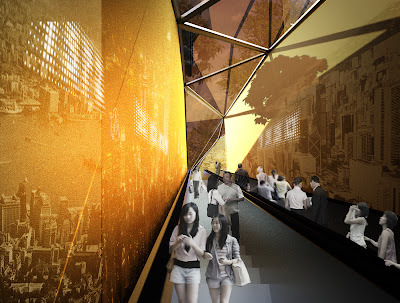 Unfortunately the building will be given back to the government and the legislative counsel which will make it highly unlikely to be open to public ever again. Being a security fortress now, the building will finally be a very hostile one to the urban fabric. The question remains if a demolition of the building would have not been more beneficial in the end as it would have introduced commercial spaces as well as civic functions to the site. Even more unfortunate at this point is that the initiative which was fighting for the remain of the West Wing is silent since the building is preserved. And this although the West Wing is even more demolished and stripped of its social function at this point.

Although spatial preservation is guaranteed, the building lacks its socially relevant dimension by converting it to a state of privateness and disclosure. 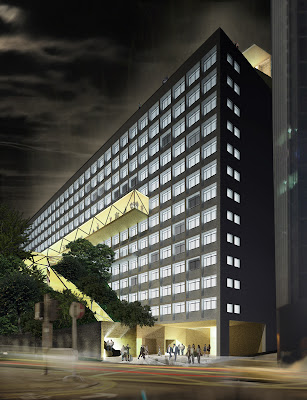 In regards to the debate whether or not West Wing deserves a Grade I Preservation status, our Louise Low has presented an article to the public to the debate in April:

A casual urban wanderer through the verdant hillside along Battery Path, behind the HSBC tower, may look up and wonder about the curious building perched at the top - its facade has not been usurped by giant billboards, display merchandise do not crowd its windows, its structure is unadorned by LED lights. In the midst of the shimmering edifices driven by commercial and economic impulses, it silently advertises itself as a concrete anomaly in the vortex of heavy traffic, a fort against the flux of alluring goods and money.
The staid West Wing, together with the Central and East Wing, is part of the conglomerate of former Central Government Offices (CGO) in an area marked as “Government Hill.”
Plotted at a fengshui-blessed axis to the Government House and the Court of Final Appeal, it housed the body of the Civil Service workhorse tasked with the straight forward mandate of safeguarding the interests of Hong Kong and its people. The psyche geography of the triumvirate as guardian is etched in the undulating topography of Government Hill.
Built in the 1950s, the CGO’s abandonment of the florid, conservative neo-classical colonial tradition and embrace of post-war Modernism paved the way for Hong Kong's first steps towards an image of the City as reflected by the "International Style" movement, harbinger of new social and political ideals. The symbols of state power and class structure gave way to a more global and egalitarian aesthetic.
Spartan minimalism and structural exposure spoke of an honesty, integrity and openness, of a more idealistic era when "government" seemed closer to the ordinary lives of people as mirrored in its modest, streamlined architecture.

Meticulous documentation in defense of its essence can be found in a sensitive publication by CUHK, “The Greatest Form has No Shape” and on the website “http://www.governmenthill.org/”, with embedded videos of significant emotional impact - an interview with the former Director of public Works, Michael Wright, describing the assiduous search for iron-free granite from Diamond Hill, as well as a silent film of the construction crew, both men and women, hewing stoically, shaping the land’s destiny with the same tenacity and fierce determination of those used to “eating bitter” - scornful of obstacles, unfazed under the blistering heat of mid-summer.

These will likely be all that is left of the history and collective societal memory embodied in these structures should current government plans to sell and redevelop the much coveted site forge ahead.

While the announcement of intent tiptoes nervously around talk of more profit accruing to government coffers, the debate hinges on the relative “lack of architectural merits” of the buildings. Some find them “ugly.”

Indeed, they are “ugly” among the diamond-cut designer towers in Central the way a well-worn white cotton shirt is “ugly” next to highly embellished, lavish designer fashion.

The aesthetic of simplicity and humility is understandably anathema to the current vogue for flashier architecture. It evokes a nostalgia of a different Hong Kong society. It offers a provocative contrast, and a rebuke to excesses.

As night follows day, the pendulum inevitably swings.
The economy of the past decade, inebriated on free-flowing liquidity and bubbly real estate, sprouted fantastical, mega-budget, iconoclastic architecture of an irrational exuberance in important cities all over the world. The precipitous fall of the ill-fated $1.2billion Millennium Dome of London and the Experience Music Project of Seattle from feted trophies to mocked effigies come to mind.

As bubbles burst and the hangover sets in, have our eyes made the necessary, timely adjustment in the cold light of day to judge with dry lucidity an architecture from a more sober age while under the lingering influence of the taste for intoxicating monumental follies?

From the perspective of preservation, does aesthetics even matter? Styles emerge from the history of a society, and the imperative of history is to record and narrate past truths, to capture their meaning for the unfolding present and future.

Buildings are not preserved based on market worth, maintenance costs or beauty but on the merits of their social meaning, singularity, urban memory and historic relevance.

Examples of preserved modernity include Tel Aviv’s “White City” which was awarded Unesco World Heritage status in 2003. In recognition of the need, the World Monument Fund launched “Modernism at Risk”, an advocacy and conservation program for Modern buildings in 2006. (see http://www.wmf.org/advocacy/modernism)

It is no surprise, then, that a government which now prides itself on its business acumen should offer up more bargains. After all, Hong Kong is the proverbial shopper’s paradise, the erasure of its history and a lobotomized memory is but a small price to pay for fattened public coffers.

As what’s good for big business is good for Hong Kong, an unlimited Plot Ratio and GFA should be offered to the highest bidding developers who may jointly build, market and sell as much as they may possibly wring out of the site. Whom but the most endowed, wealthy and powerful elite in Hong Kong deserve the right to move into Government Hill?

Finally, this symbolic demolition of the last frontier between the public and the private will no doubt be an event as celebrated in Hong Kong as the Fall of the Berlin Wall. To maximize proceeds, the government could auction the buildings piece by piece on eBay to serial sentimentalists or enterprising opportunists who flip them for even greater gains. It is not that the remnants of these buildings and what they once represent should not be consigned to the dustheap of history, but why should every last stone not be parlayed into payoff?