Density in Hong Kong has accelerated the transformation of architectural typologies, which is nowhere else in the world to be found. The city has become an experimentation ground for high density vertical environments. It is the most important case study for the good and the bad of city of the future.
Mixed Use has always always an imminent parameter in the typological development of Hong Kong. Scale and configuration has changed over the years, but the general condition of a hybridization of a building has remained. And this is the biggest difference to the Western Modernism, which was more inclined to segregate and separate function.

The starting point for the Radical Mix is the traditional shophouse: the hybrid of living and working under the same roof. Other than the western townhouse, it has been a typology of complexity, incorporating gardens and patios to separate and integrate the various users in a micro urbanism, rather than in a building. 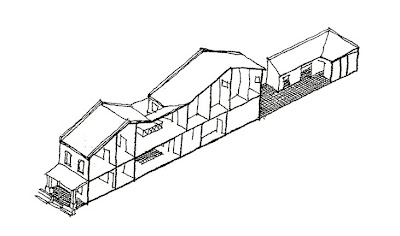 With the increased modernization and densification of the city, this model of the shophouse has not been questioned, but taken as a foundation for the Radical Mix. The explosive growth of Hong Kong after the second world war fell into a time, when modernist urban visions were discussed (again): The most successful impact on the urban development of the city in terms of typology and environmental issues must have been La Ville Radieuse and its vision for the high rise residence with free views, inside, but far away from the city.

La Ville Radieuse, le Corbusier's answer to the question of sustainability at that time, was criticized by urban theorists such as Gaston Bardet for being environmentally unsound in terms of urban microclimate and human comfort. Bardet, through his drawings of shadow casting, illustrated that the design and layout of the building blocks would, in fact, create lots of overshadowing zones which do not receive any sunlight for long periods in the winter time. With wind flow and cold winter temperatures, these overshadowing zones could bring about intolerable thermal conditions to pedestrians during the coldest months of the year.

What is unexpected is that these impossible conditions caused by the shadows created the opposite in tropical and sub-tropical Hong Kong where the millions of a new boom generation found in these shadow zones and wind ravines relief from searing heat, creating a milieu for public space and a new urbanism was born where there was barrenness before. The development of mass transit systems freed the wide streets from cars and vehicular traffic, and the subway seamlessly connect one neighborhood to another.

Like the undergrowth of a rainforest, a lively, complex street culture thrives in astonishing configurations beneath the Asian Plan Voisin, oblivious to the thoughts of the most celebrated architect of our time who would have surely approved. Driven by commercial and economic impulses, the configurations take on the nature of the old neighborhood fabric, their DNA bears the imprimatur of their cultural and societal context despite the modernity of the constructions.

The process hits a plateau, however, when the demand for a more ideal micro-climate leads to air-conditioning and an envelope, and the podium mall materializes as a result. Designed by a centralized architectural authority, malls become increasingly a closed system that manifest entropy, a state of inert uniformity that metastasized throughout Asian cities. Yet nowadays, the Radical Mix is a successful economic model, which impacts the city's life and environment far more than we would have ever expected. It's micro urbanism has developed a level of sophistication, which has lead to near autonomous and self sustainable conditions. The resulting form however, starts to counterproductive to the city fabric as a place for public and public life. 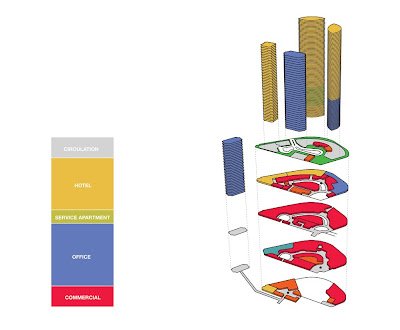 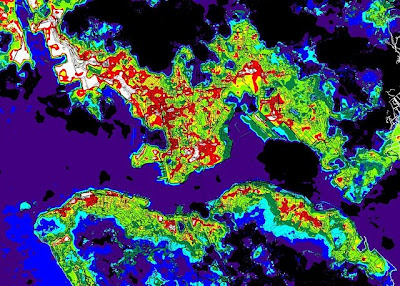 Those areas are also affected by increased road side pollution, and effect, which is worsened by the accelerated wind speed through the needle like towers, that acts as a cap for the pollutants from vehicles, containing them on the immediate pedestrian level. The resulting deterioration of the street as a positive public space, leads ironically as a countermeasure to a further increase in interior public spaces in form of podium tower mixed use developments. 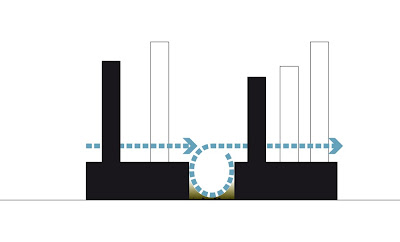 Studies have shown the negative effects of a density, driven by the hyper podium tower typology. It is up to the developer and the architect to draw conclusions from there towards a more sustainable typology. The wellbeing of the city is in the interest of the architecture as well. Therefor it becomes our most important duty, to incorporate a more expansive view of Architecture, to refocus energy into the larger context of living, especially in the understanding of how others live and our implications on their kind of environment. To simultaneously create and be created by the forces of the context, architecture is no longer an object, but also a subject in the larger scheme of things: Architecture must perform, not just form within that realm.
Team: Ulrich Kirchhoff, Louise Low, Lai Lok Sung
© 2011, ice - ideas for contemporary environments
Posted by uk at 7:30 PM 1 comment:

West Kowloon Cultural District - Oops, he did it again!

It is official, that Foster won again the West Kowloon Cultural District - after the victory in the 2004 competition over hist competitors OMA and Rocco. While in 2004 it was the giant bris soleil, which wetted the eyes of the jury, now it is the the giant water front park. 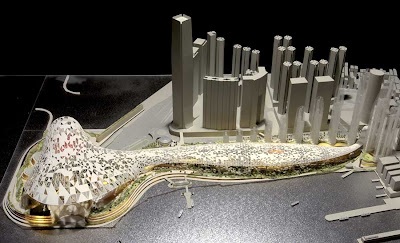 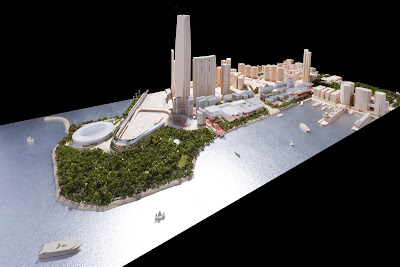 The others won't be too sorry over the loss, I guess, as they walk away with a HKD 50 Million concept design fee each, a sum, unbelievable these days for a concept master plan only.
Although there lie seven years between the two competitions, nothing has changed much in terms of the content of that project: In 2004, hopes were high. The design brief for that competition was talking about a 'world-class' cultural center, the involvement of Centre Pompidou, Guggenheim and all big players in the cultural industry. Shortly after the announcement of the winning entry, both, Centre Pompidou and Guggenheim renounced their engagement, as it was culturally and commercially not feasible. The project was shelved. The government had to realize, that Hong Kong did not have any major art collection, nor any major art collectors, which would put the project on solid ground.
Hence, it took them another six years, to rethink the strategy. Eventually, they had to react to the cultural defeat in 2004. In the meantime, planning and construction for a major train station just next to the site is underway. The high speed train will connect Hong Kong with Guangzhou, Wuhan and other Chinese cities. It will be most likely the biggest singular arrival points for tourists, coming to Hong Kong. And they come with a lot of cash, which the city is trying to get out of them.
And here lies also the dilemma of the entire project: As the train stops in the middle of nowhere, the government was forced, to develop this land concurrently, not to let millions of visitors flood into barren land and get a bad start with the city. The idea of 'Hong Kong Culture welcomes you' was born: A shopping paradise for Bruce Lee action figures, dim sum restaurants, action movies and a beautiful view over the harbor. To upgrade the sentimental shopping mall, to fit into the self proclaimed image of 'Hong Kong - Asia's World City', western high culture should give a good alibi.
As culture did not succeed so well in 2004, the 2010 competition was putting emphasis on the 'people', trying to get support from the local community. It should be a place for people, for the Hong Kongers to enjoy and celebrate their hometown. For the same people, who have seen a steep rise in property prizes in recent years with an actual decrease in living area, yet a decline in income and salaries. They should enjoy the water front and a gigantic park in a fairly inaccessible part of a city, which lies in sub tropical climate with a heavy rainy season, typhoons from May to September, burning sun throughout most of the year. Usually people gather here closer to shelter and buildings, as the safety of a dry place can be a benefit here. And as (affordable) housing is still the main problem of the city, the need for culture is fairly insignificant, compared to that. Yet, what the city does lack is an urbanized waterfront, highly mixed use, programmatically dense and a larger portion of housing.
As the winning scheme puts this park at the waterfront, it certainly upgrades the value for the adjacent buildings, which we can imagine with very expensive flats, overlooking an empty park towards Hong Kong side. Yet, the scheme stays on the level of low density, which creates a rather smaller amount of built area. What a stunning view of course, and what a possible price tag attached...It is a scheme, which reveals the true intention of the project. To transform a disadvantaged site into a luxury property heaven. And for that, the scheme does it quite well.
I forgot to mention the aspect of culture: Shortly before announcement of the final results of the 2011 competition, the chairman of the West Kowloon Cultural District resigned. Maybe him too, could not really find a good cultural reason for the project and gave up.
I personally think, the OMA entry is the best of the three projects. But it is also the most naive, trying to create an urban fabric, which in fact is really for the people, urban fragmentation, variety, scalar and programmatic change. Despite its naivety, it reminds me positively of a quote by Niemeyer, I read, when I started studying architecture. When Niemeyer was asked about his membership in the communist party, he said it is a duty for an architect to be communist, because his foremost responsibility is for the user, for the people. Unfortunately, naivety is a high value, most of the architects have lost in the last 20 years of accelerated property activities. 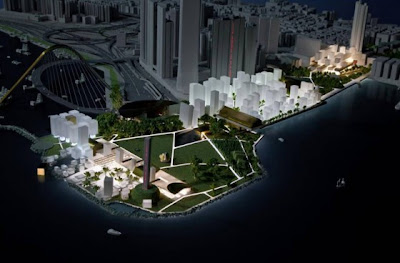 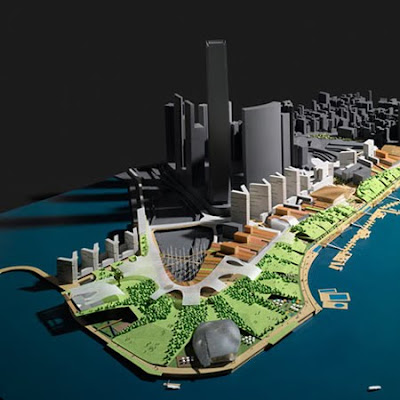 To conclude, I need to refer to developer client of ours, who had a brilliant idea at a conference, we attended about the West Kowloon Cultural District. He said, instead of giving the project to three firms to design only, the government should let ALL the architecture firms in Hong Kong, big or small, participate and design and build at least one building each.
We'll second that. And this would truly be a concept, worth HKD 50 Mil. And who knows, maybe we will see a third competition within the next few years and then, the winner hopefully is someone else.
© 2011, ice - ideas for contemporary environments
Posted by uk at 8:26 PM No comments: