In 2012 we were asked to redesign a display system for COATS. The company provides high end threads with a range of more than 10,000 colors. Samples are placed in garment factories all over the world. We were confronted with their current cabinet that is a tightly packed drawer system. Being very difficult to find the right color from within all the different drawers, the system was quite inefficient at both time efficiency in finding and searching the right color samples as well as presenting the color system as well as the quality of the company in the right way:

We were looking for a concept that makes the display easier to use, easier to view as well as easier to compare and find colors within. We decided to design a column where all tread cones will be visible to the exterior. In order to be able to compare different colors and thread qualities, we designed the column as an interactive system of stacked plates which can rotate agains each other.

The column becomes a visual graphical device as well as an interactive object, far more easier to use than a sealed cabinet. 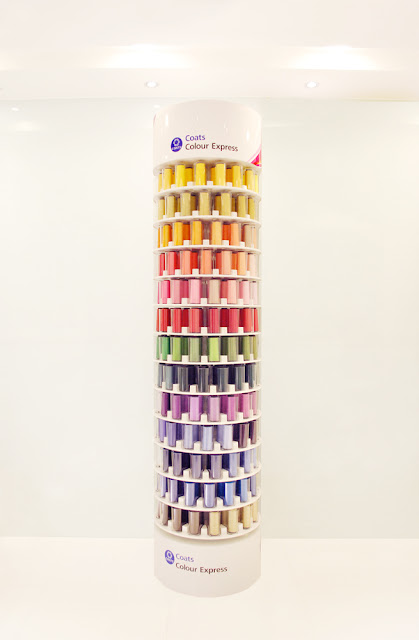 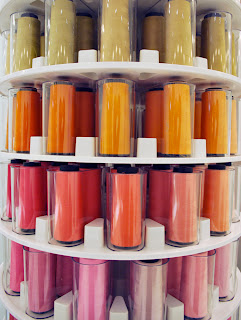 One of the agenda of the display was to be more space efficient than the storage cabinet. We introduced a Kanban system, which holds two cones in a container, while one acts as a reserve. With the built in storage system no further space is required within the factories and samples can be easily replace once they are used. 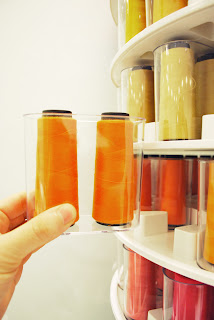 Challenges of Hyperdensity and Vertical Urbanism

Hong Kong has one of the densest urbanized areas in the world. Densification has been consistently pushed higher over the last 50 years. From the traditional chinese shophouse dwelling which barely exceeded two stories and created a low rise high density, the density in metropolitan areas of the city reaches for domestic use alone up to plot ratio 10 nowadays.

While the traditional urban density consisted of low rise high density structures, a building had a large surface as space, serving as a public interface and semi public realm. In urbanized areas buildings were mainly shophouses with 2-4 floors of which the ground floor was commercial and public space for the inhabitants of the building. Its floor ratio of public and private space was around 1:1.

The challenge to the densification of the city is not the fact that buildings get taller. The challenge is the ratio of public space to private space, which disadvantages the public space exponentially. Even more, the building codes favor prescriptive measures to maintain public spaces (indoor or outdoor alike) at the bottom 4-6 floors. It implies that the city is not divided anymore by the plan layout of roads but by a sectional division of a small and condensed public city below 6 floors and a massive private city up to 50 floors above that datum. The floor ratio between private space and public space (as per maximum allowable number of floors for each area) shifts to a 12:1 ratio in the current metropolitan environment. As street profiles remain the same within redeveloped areas, the increased density affects the quality of the urban environment.

The implications on the city are huge and visible all over the city. Recent transformations are accelerated by the construction of new MTR lines around the city. The effects of the density are affecting especially those old areas of the city that have evolved along the hillsides: Smaller streets and thinner blocks are dictated by the topography. A random urban quarter in Sai Ying Pun around the Centre Street Market - one of the oldest districts in Hong Kong - shows the dramatic effects of the density increase in relation to the narrow road network:

The pressure on the street and the ground floor level as a last resort for public space for an dominating privatized city above is immense and leads to a deterioration of the built (and unbuilt) environment.

Yet the basic sectional configuration (of public and commercial space on lower floors, private space above) has remained the same up to today, the ratio has shifted dramatically in favor of the private space.

The question arises if the regulations are too traditional for cities that shift towards a high density environment? Particular in Hong Kong, the reality of the regulations is of prescriptive nature rather than descriptive, leaving little room for flexibility and adaptability of architecture.

Understanding the commercial driving force behind the maximization of private (sellable) space, yet with limited space for public and commercial activities left, the management and distribution of those should be revisited and made more flexible in favor of a better sectional condition of the vertical cities.

Being great supporters of hyper densification of our metropolitan environments, our design practice is always confronted with the limitations of the building codes and their simple plan oriented codes. The acceptance the plan itself as the main planning guideline ignores the complexity of high density environments; a complexity which affects plan, section, profiles in a more challenging way with way more negative side effects than it would do in a low density environment.

The question remains why vertical and sectional zoning has not been introduce yet as guidelines for a high density environment. For the benefit of improved living conditions and better urban environments, two dimensional planning has to consider more the reality of three dimensional potentials. Vertical Urbanism has been the focus of our commercial practice as well as of our academic research.

Solutions we are currently investigating as a feasibility study are the potentials of updating sectional planning parameters for high density environments, such as introducing a verticality ratio as well as vertical parcel lots:

It has been a while ago since we won an award for our entry to the international invited competition for the new VNTA Headquarter in Hanoi, Vietnam. VNTA is the telecommunication authority of Vietnam. We were invited last year to participate in this competition with international large scale firms with us remaining one of the last three finalists. In the attached picture our model is to the right (downloaded from the internet, not really representing the model in its details). 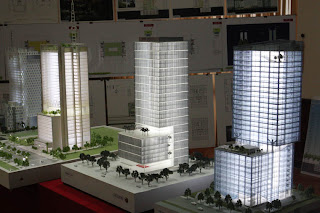 After seeing the final judging results we realized that the client had a choice between two very similar schemes (ours was one of them). Yet our muscles are limited compared to the muscles of one of the largest architectural practice in the world which won the project.

What this competition revealed to us is that we either compete on that level in terms of investment beyond the project and design or we shift to boutique style small scale projects. As the later decision would defeat the purpose of the setup of our company in the first place. Hence we are currently struggling about which way to go further with dignity and integrity. It is a long way to go still... 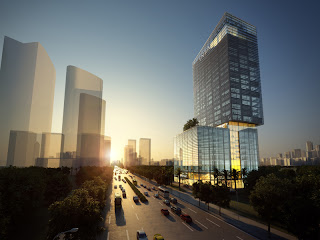 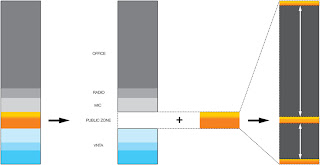 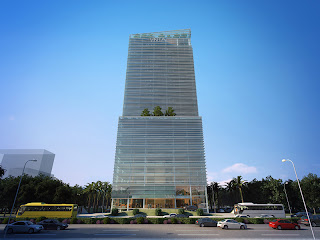 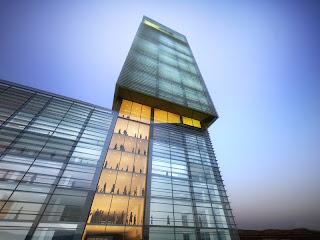 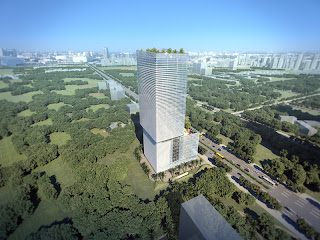 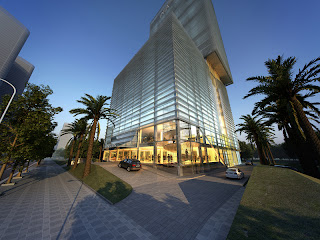 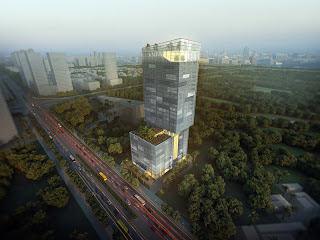 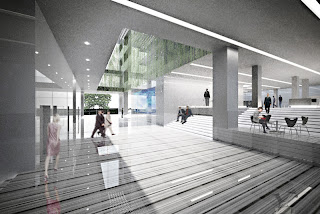 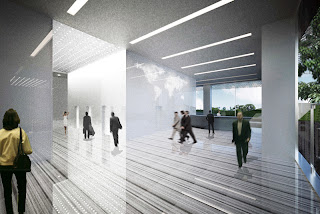 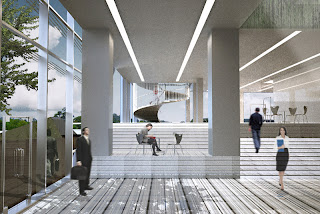 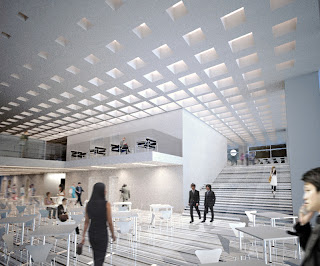 It has been a haunting project for the office. We tendered the detail design on and a half years ago to contractors. Due to the economic crisis as well as other issues, the project is about to finish now only. Being 1650 sqm it is rather complex for an interior project and not really our ground of expertise, yet it stretches beyond the usual period of construction. Finally it is getting there and we look forward to the completion of the project after Chinese New Year.

The project has been a challenge as the client's brief was suggesting a compartmentalized office with small cubicles for different departments. We took this as an opportunity to express the complexity of the circulation in ceiling and in floor only, creating a visual and spatial guiding system throughout the office public corridors.

The client added plants to the construction site at this point. It is a funny way to occupy and own the space. In the end it shows that architect's obsession and client's obsession might not align that naturally... 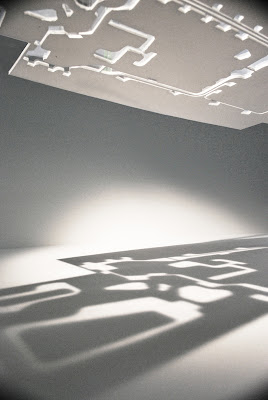 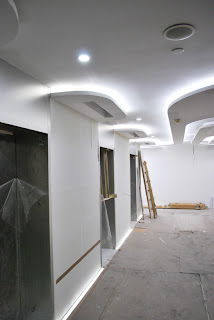 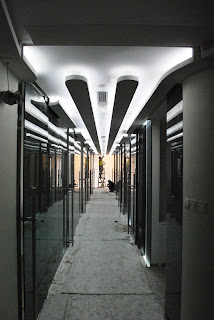 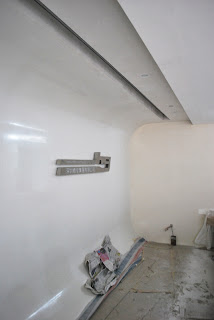 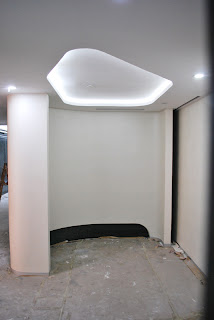 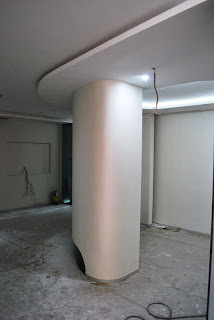 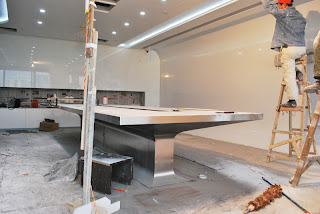 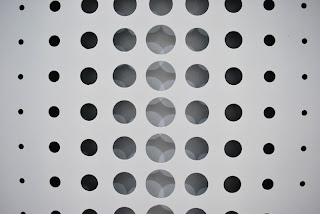 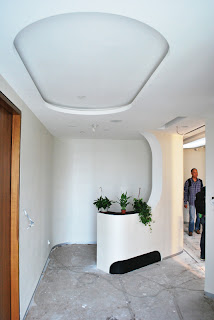 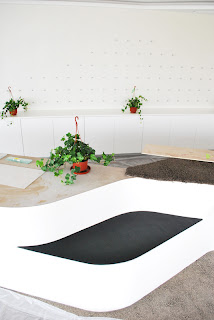 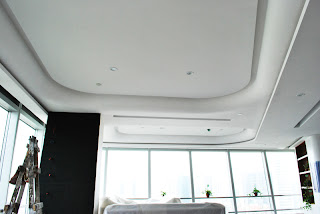 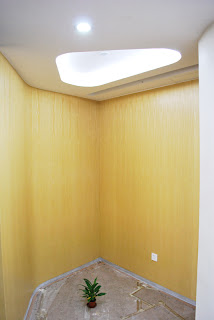 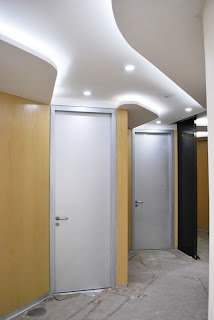 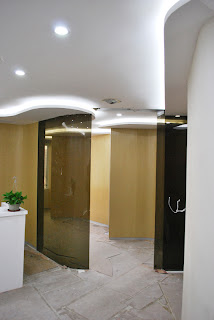 Happy New Year of the Snake

A happy and successful New Year to all of you. We are awaiting new and exciting projects in the year to come as well as a closure to some of our long lasting (sigh!!!) construction sites.