After the sad closure of the Victoria Park outdoor swimming pool, which we have written about in our last post, we decided to look for our most favorable outdoor pools. Please find below our top 9 in random order:

Alvaro Siza, Leca
Beautiful seafront pool that makes use of the natural topographical formation. Rocks are embedded into the pool design. On different platforms, you have a stunning view over the Atlantic Ocean. The pool is fed by seawater only. Some pools are so close to the shore that they are a natural wave pool. 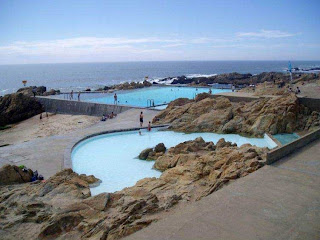 Peter Zumtor, Vals
Serene and Zen, the minimal design enhances the peace and tranquility of the pool. Similar to Siza, natural elements and materials play a vital role to the pool and its atmosphere. 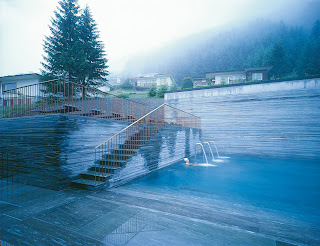 Pichler+Traubman, Private Pool
Although the pool is very small, it features with the singular operation of a sliced and folded plane a huge variety of functions. From water slide to beach slope to underground elements. The pool picks up the language of the landscape as a topographical change. 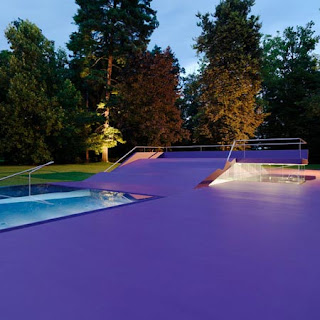 MVRDV, Sloterpark
Never built, the pool design makes use of the quality of the section of a pool and makes it the generator for the entire building.

Moshe Saftie, Marina Bay Sands Sky Park
The proportions of the entire development went very off compared to the commission proposal. Yet, being located above Singapore, the pool is a fine example of what spectacular sight an endless pool can allow for. It is clearly one of the most interesting sightseeing tower experiences, I ever had. 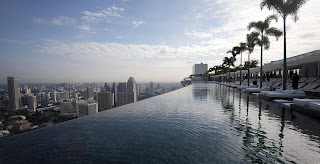 Plot, Copenhagen Harbour Bath
Fed by seawater, the pool is framing the nature through topographical transformation of the wooden deck. The pool is built into the river and has a strong presence of the city around it. The beauty of the pool lies in the multi functionality of the wooden deck, which can server as a sunning deck as well as a springboard. 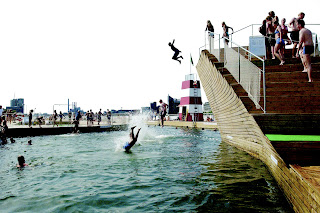 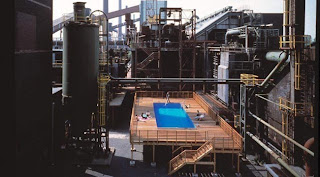 Eco Pool
One of the most beautiful swimming experiences I had beyond ocean and lake, was in an eco pool. Spatially very interesting as it blends the garden pond with the functional pool. The importance is that the ratio between heavy planted shallow water (for cleaning and filtering) and the pool itself is at balance. It also takes time to create an equilibrium to the pool. But after that, water quality is unbeatable. 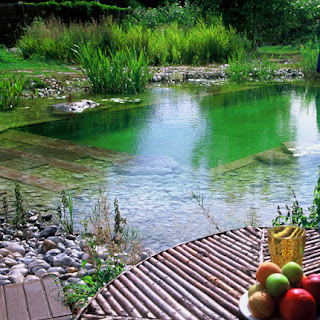 Pamukkale
Pamukkale in Turkey is not man made. It is a natural formation of ponds and puddles. Maybe the most imaginative and design oriented swimming experience - if only it would have been invented by man. 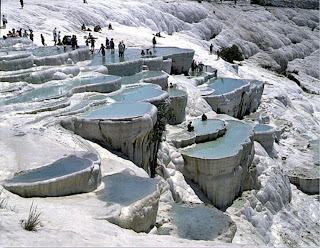 All images have been downloaded from the internet, we do not claim authorship over those images.

Summer is coming to an end. So is the life of the Victoria Park Outdoor Swimming Pool. It closed its gates yesterday at 10 pm for the last time. 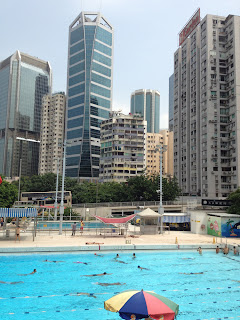 Being a passionate swimmer myself, I am deeply saddened by the closure of this wonderful urban experience. For the past few years I have spent my daily morning swim in that pool. The best moments were at the beginning of the outdoor swimming season when water was freezing cold and only me and 10 lifeguards were around in the chilling morning sun. My children learned swimming in the pool. I was with them from the time of their first clumsy approaches in the water to the moment they glide naturally through the deep blue.

Nights at the pool where startling. The pool lied at the edge of Victoria Park, surrounded by the city that formed a formidable background to the scene. The moment the sun set, buildings began to sparkle. First as a reflection of the setting sun, then as a powerful skyline of artificial lights. Whoever knows Hong Kong, knows the seduction of its skyline at night: the fascination of the behemoth of urban invention and innovation. 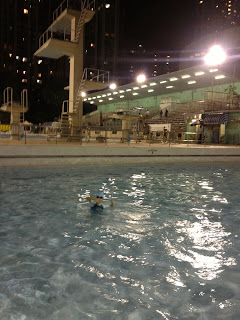 And in the middle of the city was this giant pool (during hot summers a rather overheated jacuzzi) from where you could enjoy the beauty of the skyline. It always was a magical and surreal moment, floating in the water and watch the city passing by, day as night alike.

To me, the swimming pool and the already demolished Kai Tak airport were some of the few formidable metropolitan sights of Hong Kong. They were proofs of the intense effects and collisions of a hyper dense city. But they also demonstrated that you could be at peace within this moloch of a city; it showed that the collision and confrontation can create urban poetry at its best.

Opened in 1957, the pool has been one of the oldest outdoor pools of Hong Kong, one of the few with a 5m diving pool and a 50 m lap pool with a 10 m dive board. It also features a grand stand for public viewing and a restaurant with pool view. The beauty of the pool lies in its design of the boundaries to the surrounding park. The park landscape was seamlessly translating into the water landscape. Changing rooms were placed under the grand stand to reduce the architectural impact of the pool. 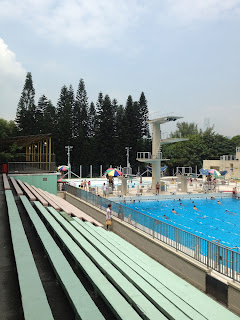 To my dissatisfaction, the newly constructed indoor pool next door is a large scale architectural mass, with no relation to the context. The design has not benefitted from the subtleness of the outdoor pool, nor from the function of a park as an urban open area for the public. An alien like, disproportionate podium block was designed, which rather resembles a shopping mall than a public swimming pool for leisure and enjoyment. It is understood that an indoor pool is a building, an outdoor pool is a landscape: However a six story disproportionate glass blob which seals off its interior from the surrounding park is a rather cynical answer towards a positive transformation of the city.

It is a shame as the city of Hong Kong missed the chance (again) to encourage excellency for its public buildings. Instead, they apply commercial and economic logic to their civic construction as well and neglect the social, spatial and historical components that have made Hong Kong what it is in the first place. 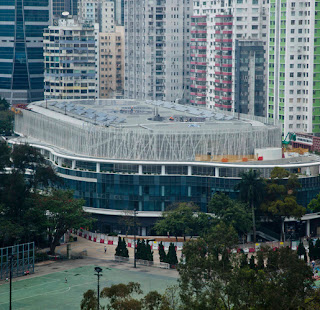 Luckily swimming requires a certain functionality. So I will find myself at peace with the new venue as long as it features a clean 50 m pool and enough space to swim.

However there must be a reason that the pool was one of the most beloved leisure venues of the citizens. During my last swim at 10 pm, there were a lot of people inside the pool. Most enjoyed the last opportunity to dive in a 5 m deep 50 m olympic size pool. In fact the bottom at 5 m was the most crowded as there will be no pool anymore of this depth. There was a large crowd at the stand, taking pictures of the great view, chatting with the lifeguards and silently but happily and enjoying the scene. Most likely some of them contemplated wether the new pool will be as enriching to the city as the old one.

When we left the pool as one of the last, we left with the certainty that Hong Kong has sacrificed another urban jewel of its glorious past to the genericness of the commercial world.